Schoolchildren in east London helped a government minister make a splash at the Isle of Dogs to launch the world’s first boat made with 99 per cent polymer from recycled plastic waste.

Environment minister Thérèse Coffey boarded the boat for its maiden voyage in the Millwall Docks yesterday, along with pupils from nearby Canary Wharf College and British Paralympic champion sailor Alexandra Rickham.

The aim was raising public attention to growing levels of plastic pollution in Britain’s waterways.

The Hubbub environment charity built the vessel to help clear plastic waste dumped in docks and waterways which is then recycled to build more polymer boats for a “litter-busting fleet” to use all over Britain.

“This solution shows the damaging effect plastic litter has on our environment and wildlife,” the environment minister said. “We are planning one of the world’s toughest bans on plastic microbeads.”

The Canary Wharf schoolchildren were first involved in fishing plastic litter from the docks earlier this year when one parent, Christine Armstrong, got a group out one weekend. They collected rubbish to “make something as useful” like the plastic boat launched at the Docklands Sailing and Watersports centre yesterday.

School principal Sarah Counter said: “Our pupils are shocked when learning to sail on Millwall Dock by the amount of plastic floating in the water.

“The children saw the difference they can make to the dock in just an hour, armed with fishing nets, waterproofs and a little adult help.”

The punt is to be used for ‘plastic fishing’ trips by her pupils, the public and businesses interested in taking part. The plastic they collect up will be used to build more boats, creating a litter-busting fleet that can be deployed across the UK.

The 12-seater ‘Poly-Mer’ was built in a design that’s 1,000 years old, but with modern materials like ‘plaswood’ combining recycled plastic with wood.

Yesterday’s launch was the first time recycled plastic had been used to build a boat, which was made by Mark Edwards in Richmond who previously built the Queen’s ‘Gloriana’ barge. 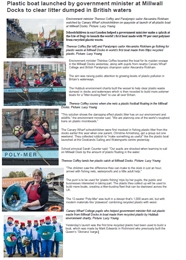