A senior plastics recycling industry executive has downplayed suggestions that reprocessors are under pressure due to the impact of falling oil prices on the price of virgin polymers.

Mike Baxter, external affairs director at plastic film recycler and manufacturer BPI Recycling Products, was responding to suggestions that UK plastics recyclers are ‘in crisis’ due to falling oil prices pushing down the price of virgin polymers – and making recycled polymers less attractive to manufacturers.

Mr Baxter was speaking at the Recoup annual conference and AGM in Peterborough last week (29 September), in a session on the challenges and opportunities faced by the plastics recycling sector.

During his presentation, Mr Baxter said that the collapse of three of the UK’s major plastics recycling firms – Eco Plastics, Closed Loop Recycling and Plasrecycle – appeared to have been largely blamed on a ‘myth’ that the falling oil price had made it harder for recycled plastic polymers to compete on price with virgin material.

In early 2015 – oil prices fell from more than $100 per barrel to their lowest levels since 2009 and have remained at close to $50 per barrel ever since. However, Mr Baxter said that the value of virgin HDPE plastic had remained stable during the same period.

“The price of oil has nothing to do with the price of virgin polymer. Please do not fall for the con that is a convenient coat hanger for the plastics recycling industry to fail,” Mr Baxter said, adding the failure of the three businesses was in part due to their reliance on public funding.

He said: “Yes there have been three failures. They all have one thing in common, they were heavily subsidised by your taxes and mine. In the case of Plasrecycle – which has just gone under and nobody wanted to buy – to the tune of £14 million. You can buy a lot of Eremas [machinery] for that.

“People think that the whole recycling sector is affected, but it is not. In this room today there are some very successful, profitable and expanding recycling businesses. The expansion that has taken place in the last ten years has been dramatic.”

Mr Baxter added that businesses are continuing to invest in the UK’s plastics recycling sector – which he claimed would not be the case if the industry was in an unhealthy state.

“A managing director of one of the largest suppliers of equipment told me he had sold 20 new plastics recycling machines in the last 18 months, and they all have a capacity of at least one tonne per hour. Some of that is where plant is being upgraded, but believe me these bits of kit cost more than £1 million a unit, and if you’re an industry in crisis and you’re a PLC like we are that have to answer to shareholders, you’re not going to be spending £1 million of their money for an industry that is in crisis.”

During the conference, delegates also heard from Kevin Vyse, senior packaging technologist at Marks & Spencer – who said that the retail giant is assessing whether it could reduce its plastic packaging down to one polymer type to aid recycling.

For more information about all Plaswood products including detailed datasheets about each product range visit http://www.plaswoodgroup.com/ or call 0333 202 6800. 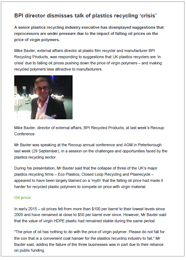